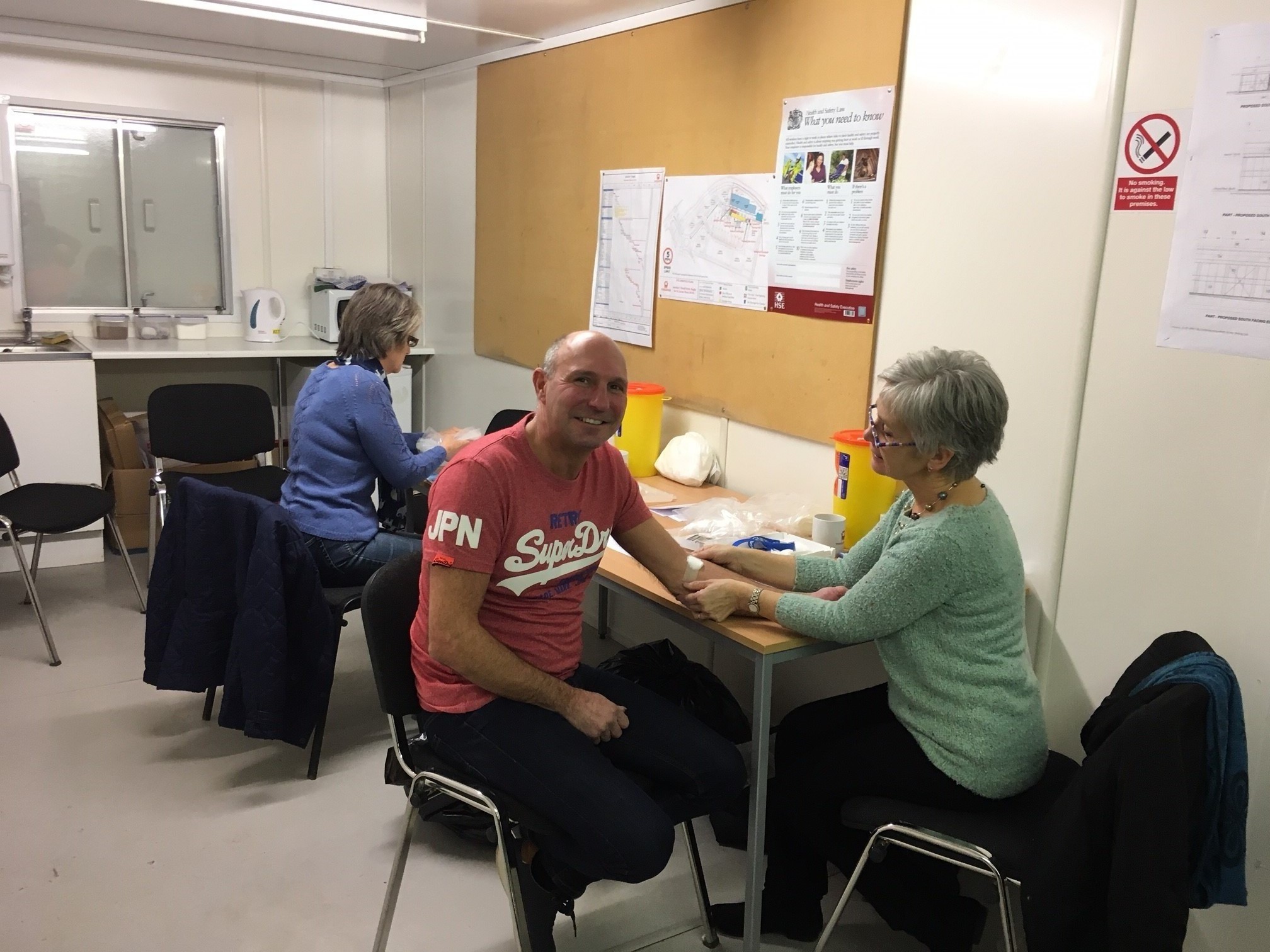 We don't think twice when a local company offers to sponsor an Awareness Event - the answer's always 'Yes'! However, when the offer comes from a busy construction site manager, while still not hesitating, we did recognise we might have a few logistic problems! Also, because of Christmas deadlines, we only had 4 weeks' notice. The site was on Rugby's expanding Junction One Retail Park where GF Tomlinson are putting the finishing touches to two large stores due to open in the New Year. The site manager, Kevin Gamble, was keen to organise something for the benefit of the local community. Kevin's family has been affected by prostate cancer, and because of this, he was keen to help raise awareness of the risks. So, we looked at the possibility of using a mobile clinic - but NHS and local Public Health cutbacks pretty soon ruled out that option! Plan B was to use two of the four Portakabins on site. Kevin assured us this was feasible - one for registration, the other for testing. Given the tight timescales, we needed early assurances we could provide the testing and sample processing for the 19th, so we contacted Graham Fulford. Graham's operation is very slick, and seemed ready to swing into action at a moment's notice! So, with Graham covering the testing, we were free to concentrate on publicity and organising volunteers, etc for the day.

Saturday the 19 November dawned with not a cloud in the sky! The kabins were all warm and prepared for us, and, as good as his word, Graham and his well organised team were ready to go by 9:30. All we needed now was participants! And, sure enough, men began appearing at 9:45, and a trickle became a steady stream! All together, we tested 143 men (number 143 pictured).

Our thanks are due to Kevin Gamble, the prime mover in this event, his company, GF Tomlinson, for their generous support, to Graham Fulford and his team for their highly organised testing operation, and not least to Rob Blacklock (resident Consultant) and our volunteer stewards (pictured) who guided and chatted to the waiting men.

We are delighted to be able to resport that we had two very successful events. The First one on September 18th, with the Rokeby Lions in Rugby. We tested 184 men. On October 2nd at St Finbarrs we tested 142 men. On both events we used the GF online booking system, unassisted and they ran smoothly with minimal queuing. See Coming Events for more detail.