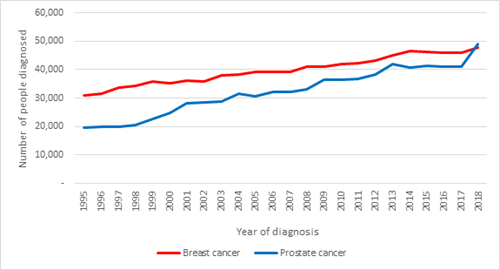 On Monday evening, news broke that prostate cancer has overtaken breast cancer as the most commonly diagnosed cancer in England.

We knew this was going to happen, but not quite this soon. And not so dramatically, with latest data showing a jump of 7,828 diagnoses, 19% higher than 2017.

Here's our take on the new data and why this can be viewed as a positive thing overallOn Monday evening, news broke that for the first time ever, prostate cancer was the most commonly diagnosed cancer in England. This trend is likely to be reflected across the UK, and comes much sooner than the prediction of becoming the most common cancer by 2030.

There were 49,029 men diagnosed with prostate cancer in England in 2018 – the highest ever recorded.

Why have numbers increased?

The dramatic increase in diagnoses shown in the Public Health England data is likely due to more men having a PSA test, after we released data in early 2018 showing that prostate cancer had become the third-biggest cancer killer (passing breast cancer deaths for the first time), closely followed by Bill Turnbull and Stephen Fry bravely talking about their prostate cancer journeys, increasing awareness of the disease and creating what’s now called the Turnbull-Fry effect. It’s also due to the fact that men are living longer, when their risk of being diagnosed with prostate cancer is increased.

We don’t know whether diagnosis rates will remain at this record high, and these figures only refer to men in England, but they’re indicative of UK-wide trends (full UK-wide data will be released in spring.) We also don’t know how many of these cancers may never have been detected and never caused men any harm. We do know that for some men, the earlier diagnosis made possible by this increased awareness could have saved their lives.